Home Journal The Colours of Hermès

The Colours of Hermès

LÀB REPORT
From deep violet to cherry red, sapphire blue to ballerina pink, Hermès’ kaleidoscopic library of colours is just as awe-inspiring as its array of leathers. Handbag collectors are fluent in the colour language of the label, with each shade given its own name and in some cases garnering a dedicated following. But what should you consider in terms of colour when making your Hermès investment? Read on for our introduction to the many hues of Hermès. Text by Suzannah Wilkinson
Share

Artisans in Hermès’ renowned French workshops are trained to expertly mix dyes to the brand’s exacting standards, ensuring consistency across the decades. However, leathers don’t always respond in the same way to a dye, depending on their texture and grain, so don’t expect a particular colour to look identical across different bags. If you need help identifying the colour of your bag, or advice on leather varieties, contact SACLÀB and our expert team will be happy to assist.

If you’re a first-time Hermès customer, it makes sense to start with a classic colour which will stand the test of time in your wardrobe. Before it expanded into the rainbow of pigments it now offers, Hermès originally kept to a tight edit of sophisticated shades: Noir, Rouge H, Blue Marine and Vert Anglais, adding Gold and Parchemin a little later. Naturally, you’ll find that vintage Hermès bags are largely only available in these colourways, so if you’re scouring the market for a style from the ‘70s or ‘80s, your options will be more limited than with a contemporary bag.

These six timeless tones – black, red, navy, dark green, brown and beige/cream – should be seen as the staples of any bag collection, and are always in demand on the secondhand market. Hermès now offers three of these shades on a permanent basis in their bag collection, whilst others repeatedly crop up during seasonal releases.

Every woman needs a Little Black Bag in her wardrobe. The colour of the original Birkin created for Jane Birkin herself, jet-black Noir leather is a shortcut to chic. Keep your eyes peeled for an Hermès ‘So Black’ style – complete with blackened hardware – for an edgier look.

-> Shop our selection on Hermès Noirs

Gold is one of Hermès’ most in-demand colours, first popularised by Grace Kelly in the 1950s. A buttery tan hue, it’s particularly beautiful with gold hardware. If you love the caramel tones of Gold, another option to look out for is a bag made from natural Barenia leather, which will develop a unique patina as it ages.

-> Discover our selection of Hermès Golds

A grey-brown taupe, Etoupe is the versatile neutral of Hermès’ permanent library. It has cooler tones than Gold, giving it a more utilitarian feel. If you’re looking for a grey without the brown undertone, we recommend Etain, another beloved neutral of the house.

First created in 1925, Rouge H is one of Hermès’ signature archive colours. It’s a rich, elegant dark red with a hint of brown, making it perfect for autumn/winter dressing. Collectors prize Rouge H in vintage Box Calf leather, which produces a lighter, more cherry-red shade, whilst Epsom leather picks up the burgundy tones of the dye more. 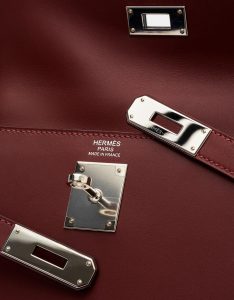 Parchemin is a ladylike pink-toned cream, which we’ve seen used from the 1960s onwards. A light shade without the harshness of pure white, it works well all year round – although of course it requires careful maintenance. If you prefer a fresher shade of white, seek out Craie (translating as ‘chalk’) – again a semi-regular in Hermès boutiques.

The differences of the Parchemin shade on (1) Clemence and (2) Niloticus Lizard skins. Image saclab.com.

When it comes to exotics, bright, jewel-like colours are considered classic for crocodile, lizard and ostrich skins, alongside a certain record-breaking neutral:

The most celebrated of Hermès’ exotic shades has to be the Himalaya, a carefully graded combination of snow-white and earthy taupe on Nile crocodile hide, evoking the peaks of the Himalaya mountains. Similarly, the brand’s Ombre Lizard bags garner extraordinary prices as an über-luxurious neutral.

Rose Bubblegum (also referred to as 5P Pink), a legendary candy pink, is the most expensive exotic colour besides Himalaya and Ombre Lizard: a Kelly Mini in Bubblegum Alligator can easily fetch £70,000–80,000 on the secondhand market due to its rarity. This is closely followed in value by Rose Scheherazade, a vivid magenta.

There’s something about glossy emerald green which really makes an exotic skin shine – it’s jewel-like depth of colour is as sophisticated as it is standout. As such, Vert Emeraude exotic bags always achieve fantastic prices at auction. If you are looking for a subtler emerald green for your exotic accessory, Vert Vertigo is a great alternative.

Obsidian greens such as (1) Vert Emerald and (2) Vert Vertigo on saclab.com. Images saclab.com.

Alongside their classic shades, each season Hermès introduces a limited-edition palette of new colours – a hotly anticipated moment in the handbag calendar. In terms of return on investment, seasonal colours are unpredictable: some become instant hits, quickly accelerating in price on the secondhand market and occasionally even making a return in later seasons, whilst others simply don’t quite take off.

At auction, Hermès’ intense pinks and blues have historically always performed well. Rose Azalee ranks highly among collectors as one of the house’s prettiest (and rarest) pinks, whilst the deeper Rose Tyrien comes with white contrast stitching to further accentuate its colour. To take it up one notch further, make a beeline for Rose Shocking – a vivid magenta.

If your dream bag comes in blue, you’re spoiled for choice with Hermès. Bleu Jean, a muted denim shade, is the perfect neutral blue. Bleu du Nord is a dainty sky blue, whilst on the brighter side, Bleu Zanzibar and Bleu Thalassa conjure up images of sparkling azure seas.

Alongside these established brights, SACLÀB co-founder Oliver Stueck has noticed a new trend on the secondhand market: buyers are scrambling for pale pastel shades. 2012’s Blue Lin release is a soft light blue with a hint of grey, a forerunner to the highly popular 2020 shade Bleu Brume. Shades of off-white are also particularly coveted: Gris Perle is a pearlescent white-grey whilst Beton is notable for its rare pairing with rose-gold hardware.

Which colour has caught your eye? If you have your heart set on a particular handbag hue, let us know what’s on your wishlist and our team of experts will begin the hunt.